Topic:
Diagrams
Friday, I wrote about Kittey Burns Florey's attempts to diagram a few of Sarah Palin's utterances. Today, I'm going to continue with the second of her attempts, which is decidedly more challenging because the utterance has serious grammatical issues no matter how you slice up the sentence.

I know that John McCain will do that and I, as his vice president, families we are blessed with that vote of the American people and are elected to serve and are sworn in on January 20, that will be our top priority is to defend the American people.

My first reaction is to scream, "The stupid, it burns!" And Florey comments:

I had to give up. This sentence is not for diagramming lightweights. If there's anyone out there who can kick this sucker into line, I'd be delighted to hear from you.

Although I greatly prefer tree diagrams to the Reed-Kellogg diagrams that Florey uses, I can't resist such a challenge, so here is my attempt. Warning: much verbiage will follow. If you just want the pretty pictures, skip to the end.

In analyzing this segment, it would be nice to check the audio, because I suspect that certain portions of the sentence, for example the utterly bizarre families, actually represent on-the-fly revisions. With the audio, hesitations and intonation might give us a better sense of what she really meant. Unfortunately, this sentence only appears in the full transcription of the interview and not in the edited form that actually aired. I have not found any audio source for this segment of the interview. In the absence of such confirmation, it seems only fair to adopt a principle of charity and whenever we have a choice between a more grammatical and a less grammatical alternative, we should give Palin the benefit of the doubt.

Even so, to come up with an adequate analysis, we're going to have to expand the diagramming toolkit a bit. When spoken language is reduced to written form, it often looks disfluent. We all have hesitations, repetitions, restarts, structure shifts, and other problems that would not be tolerated in writing, and diagrams, particularly Reed-Kellogg diagrams, aren’t really designed to capture these problems.

If we're going to represent such spoken-language characteristics fairly, we must approach diagrams of spoken language differently from the way we approach diagrams of written language. In writing, we take the sentence to be the basic unit of analysis. But sentences are artifacts of writing. They exist because someone has decisions to place a period in a particular place. (If you feel inclined to dispute this, meditate on the difference between a series of independent clauses separated by semicolons and the same clauses separated by periods.)

For spoken language, therefore, clauses should really be the primary analytical unit. As a consequence, I don't accept the category of run-on sentence as valid for spoken language. If we have more than one independent clause, we must treat them separately, whatever the transcriber has done.

Another aspect of spoken language that would be nice to capture is its unplanned nature. That is, we take written language to be fully planned out. If it's well formed, we should be able to account for all the pieces in the sentence. But when we're speaking, words frequently leave our mouths before we fully determine how we're going to finish the thought. So if we start down a path that we realize won't work, we may have to stop and try a different approach. But unlike writing, we can't delete those earlier words.

The maximally charitable approach to a false start would be simply to delete the words from our analysis. And it's true that listeners are usually willing to disregard those false starts and attend to what we're really trying to say. But false starts to impose a processing burden on the listener, who has to back up along with the speaker. Completely ignoring them makes the less articulate speech sound more articulate. So I suggest diagramming false starts as fragmentary structures, placed in the appropriate position in the with the words struck through.

With those preliminaries out of the way, here's my analysis.

The opening clause I take to be independent, and so it really ought to be diagrammed separately:

I know that John McCain will do that, and I, as his vice president.

The expression do that is clear from context and refers to "protect the American people." I take "and I, as his vice president" to be a somewhat awkward postposed coordinate subject (see the Cambridge Grammar, p. 1346 for more details), and to judge from her diagram, that's how Florey reads it too.

Within the Reed-Kellogg system, there are two ways to handle this phrase, neither fully satisfactory. One way, adopted by Florey, is to treat it as part of a compound subject:

But a postposed coordination is not really the same as a compound subject. For one thing, although it's not evident in this particular example, those postposed structures don't participate in subject-verb agreement. Contrast, for example, "I am eager to help, and John too" with "John and I are eager to help." Intuitively, this diagram shows both parts of the compound as playing an equal role as subjects. In reality, the phrase functions as an afterthought, and it would be better for our diagram to reflect its status as a supplement. Another problem with that analysis is that it treats the prepositional phrase "as his vice president" as a modifier of I. But personal pronouns do not normally take postmodification by a prepositional phrase. So although I is the semantic anchor for the modifier, the prepositional phrase is structurally part of a verb phrase.

Another possibility is that we treat this as a coordinated clause with some missing words: "and I [will do that] as his vice president." This analysis makes better sense of the prepositional phrase, and R-K has a way to deal with missing words, by using Xs: 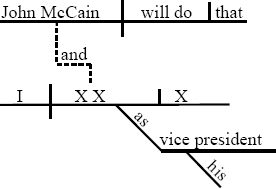 Although this version makes more sense than the earlier one, it's not self-evident that we should really be trying to supply the missing words in this fashion. For example, another plausible expansion would be "and [so will] I." I can't think of a diagnostic to determine which is the better analysis, though, so I'll leave it his way. More importantly, the X doesn't distinguish between words that are normally understood, such as the understood you in "Diagram this sentence," and those that are odd or ungrammatical to omit, such as the missing that in *The dog __ ate my homework had indigestion. We could get around this by expanding the system a bit, for example by using * to mark the omission of a necessary word, with the required word provided in brackets. 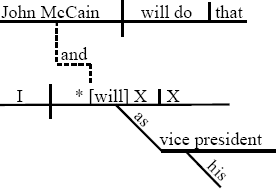 Note that I've left the X's for do and that in place because they are allowed deletions. By this reading a so or too would improve things, but I don't take it to be grammatically necessary.

Moving on, the puzzling families appears to have no connection to anything else in the sentence. Without the audio, I can't be sure, but I find the reading "families we are blessed with," which Florey adopts, to be implausible. For one thing, in the latter half, she appears to be talking about being blessed with getting the vote. So I take "families" to represent Palin's initial start at some talking point (e.g., families want us to protect them), which she then decides to abandon.

What follows, read literally, looks on the surface like three declarative statements, but in the context of political blather, this is clearly a conditional thought, so we should understand an implied if. Again, without the audio, it's hard to tell if the missing word was just inadequately articulated or is entirely missing, but I'm fairly confident this is just a variation on the stock "if elected..." line that all politicians use.

The end of the sentence also appears hopelessly ungrammatical: "that will be our top priority is to defend the American people." Although you could fix the sentence by deleting is and treating to defend the American people as a trailing modifier, I think that solution is too charitable. It's not plausible in terms of on-the-fly processing, since the sentence is structurally complete after "our top priority." In other words, is cannot be explained as an initial, discarded attempt. Rather, it is tacked on later and so Palin is guilty of a structure shift in which she loses track of the earlier part of the sentence. Our top priority starts as the complement of be but then morphs into the subject of is. I don't consider this to be the same as a false start. In a false start, the aberrant unit simply has no place in the larger structure. In this case, the strange unit needs to work in two different places.

My solution is simply to diagram the shift by showing the phrase filling both functions. To highlight where the diagram shows a grammatical error, I'll use red for emphasis.

Here, at last, are my diagrams in Reed-Kellogg format. For reference, this is how I read Palin's remarks. Notice that it's still ungrammatical, but it's less hopelessly intractable than the transcription suggests:

I know that John McCain will do that, and I, as his vice president. ... [If] we are blessed with that vote of the American people and are elected to serve and are sworn in on January 20, that will be our top priority is to defend the American people. 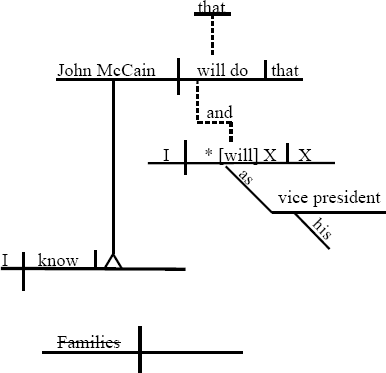 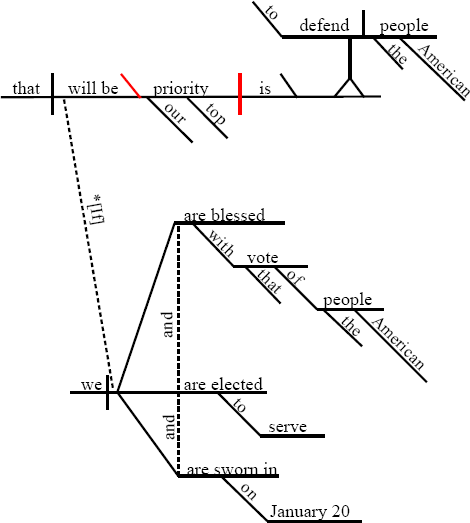 [Update: If you're wondering about the odd use of that in that vote of the American people, see this Language Log post and this one at polyglot conspiracy. It appears to be part of Palin's normal way of speaking.]

For comparison, here's the problematic end of the sentence as a tree diagram (I leave the earlier part as an exercise for the reader):

I've shown the competing parsings as dashed red lines to highlight the problem, but if you understand how to read a tree diagram, even that isn't really necessary, as unlike a genealogical tree, a node in an immediate constituent structure diagram should not have two parents.

I don't know about you, but I find the tree diagram a more effective visualization of the problem. So while it does appear possible to extend Reed-Kellogg diagrams to indicate where a sentence is grammatically flawed, it may be a somewhat pointless exercise. There are many reasons to favor tree diagrams, intelligibility being chief among them.

I was born in 1944 and my father in 1920. He used to tell me when I was still a kid back in the late 1950s that when he was my age there was a radio comedian who called himself Senator Fishface. He would spout all kinds of high-sounding rhetoric that seemed impressive until you tried to glean some meaning from it. After listening for some time you began to realize he wasn't actually saying anything at all, but simply indulging in pompous sounding double talk. My father found it hilarious that this parody of what many politicians actually do initially fooled you into thinking he was going to say something weighty only to discover you'd been had. Palin should aspire to so much. Instead of leaving you laughing because you've been had, her speech is recognizable as ridiculous right from the get-go. Her double talk is just as meaningless, but instead of sounding initially impressive, it comes off as just plain dumb, mindless rambling. It's only funny when Tina Fey parodies it. It's hard to laugh at the real thing. It's more scary than funny that anyone could consider actually voting for someone who talks like that, but after Bush, you have to wonder. At least a little more than half the voters had the good sense not to. That almost half of us didn't have that much sense is still kind of scary though, isn't it?