A little scrutiny will show that up does not have the same function in both sentences. For example, while we can create a cleft sentence with up her dress, we can't do the same thing with up her number:

Also, we can move up to the end of the first sentence, but not the second:

Both these rearrangements demonstrate that up her dress forms a constituent, but up her number does not.

Additionally, we can replace up her dress with other phrases that indicate direction:

But we cannot do the same thing with up in (2) and still have the verb mean the same thing. In other words, the meaning of looked up as a compositional unit differs from that of looked by itself.

Finally, sentence (3) allows right/straight modification, but sentence (2) does not:

All of these differences indicate that up in in (3) behaves like a typical preposition, but in sentence (2) it does not. Words that function in this unusual way are called

Because up her number in sentence (2), does not constitute a single constituent, we analyze her number as a direct object, which makes look a transitive verb. Thus we will diagram the sentence like this:

If the particle follows the verb, the diagram looks like this: 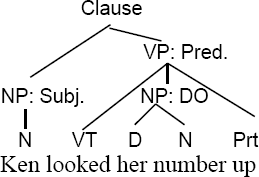 These diagrams imply that we consider particles to be separate constituents within the verb phrase. Some grammar books call verb + particle combinations "multiword verbs." That name implies that the particle is actually part of the verb. We won't use that terminology—the particle isn't actually part of the verb. The fact that it can appear after the direct object demonstrates that. But we still must be able to distinguish verbs with particles from free combinations of verbs and prepositional phrases. Fortunately, the test is relatively straightforward. If the sentence can be transformed so that the word appears after the object, it's a particle:

Notice that if the object is an unstressed pronoun, the particle cannot appear between the verb and the direct object. In this case, it must come after the object:

If you can create a cleft sentence by moving the word along with the noun phrase, then it's a prepositional phrase:

This test, though, is not definitive. If you can move the phrase, it is a PP, but some verbs are followed by prepositional phrases that cannot be moved:

We continue to call of the remaining objections a prepositional phrase because of cannot be moved like true particles: