Some students find the concept of nominals to be confusing. Remember that nominals are simply another constituent of grammar. Like other constituents such as phrases and clauses, they function as units. Like phrases, nominals also have heads. Remember that head words are important because their features play a role in how the entire phrase functions within the sentence. That's why we name the phrase after the category of its head word. One way to think of this is that the properties of the word carry over to the phrase. Looking at how this works in a tree diagram, we can think of the properties of the head word as percolating up from the individual word to the phrase. The following diagram represents this "percolation" by showing the edges between the head words and their parent nodes as arrows.[1] 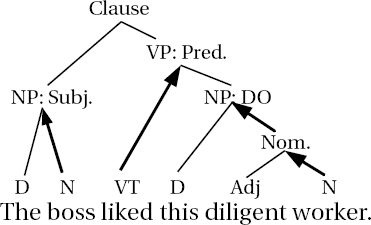 With the diagram serving as a visual metaphor, we can say that the features of the head word project upward in the diagram. In the case of the phrase this diligent worker, the noun worker is the ultimate head of the whole phrase, as well as immediate head of the nominal diligent worker. But in the larger sentence, worker is not the head of any higher unit. There is no arrow from the direct object to the VP because the direct object doesn't head the VP, the verb does. This observation gives us a way of conceptualizing the difference between nominals and NPs. Looking at the diagram, we can see that each phrase is the maximal projection of a head word. In other words, the head word's features project up to the phrase level and no further. The nominal is a constituent that has a noun as its head, but it is not the maximal projection. A unit higher up in the tree also has the same word as its head.

[1] For present purposes, we treat the clause as non-headed, which is the traditional assumption.

Topic:
Grammar
Syntax
‹ Generalizing the Pattern up Other Phrase Types ›