(2) Russia's proposal at the conference

The phrase in example (2) is talking about a kind of proposal. Russia's and at the conference tell us what specific proposal we're talking about. Proposal, therefore is the head word.[1]

Apart from simply being a convenient way to name phrases, the relationship between the head word and the phrase type captures a significant fact of syntax: the category of the head word plays an important role in determining where in the sentence the phrase can go, as well as a variety of grammatical rules such as agreement between subject and verb.

(4) {The [contract] between the boards of the two companies} [was] nullified by regulators.

For example, in sentence (4), contract is the head word of the NP which is the subject. The whole subject, therefore is singular, and agrees with the verb was, despite the two plural nouns (boards and companies) which are closer to the verb in terms of linear order, but which are actually buried in prepositional phrases.[2]

This example also illustrates another important point: phrase structure is hierarchical. That is, phrases can nest within phrases to any level of complexity. Thus the subject of (4), "the agreement between the boards of the two companies," contains two prepositional phrases, each of which itself contains a noun phrase. We can show this relationship in a diagram: 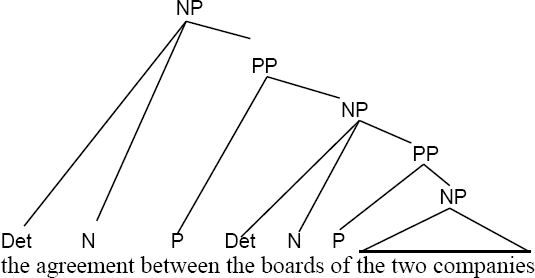 Viewed this way, even the most elaborate sentence can always be broken down into a handful of relatively simple patterns that repeat over and over.

One final note on phrases: in ordinary, non-technical usage, the word phrase means "more than one word." Thus you will sometimes encounter books that use the expression "word or phrase" to explain concepts like the subject. As we have defined phrases here, however, that expression is redundant. Because the attributes of a phrase are often optional, it is possible to have a phrase that consists of a single word.

(5) Computers intimidate many people.
(6) The young man was naïve.

In sentence (5), computers is a noun in a phrase with no attributes. It is a noun phrase all by itself. In sentence (6), naïve is a one-word adjective phrase. Treating these constituents as phrases, and not just individual words, allows us to account for many aspects of grammar in a simpler and more consistent fashion than if we treated them differently.

[1] This semantic test works reasonably well for prototypical cases, but be careful. There are many cases where the idea of the phrase won't really match the structural head. In other words, this notional definition of the head is meant to get you started with the easy cases, but it's only a rough guide. As you look at the examples that follow, pay attention to the structural patterns first, and meaning second.

[2] We are, of course, speaking of Standard English when we refer to subject-verb agreement rules. Some people do from time to time operate by a principle of attraction, making the verb agree with the nearest noun rather than the head noun of the whole phrase.