Topic:
Grammar
Prescriptivism
I'm contemplating changing polysyllabic's tag-line to "commentary by a licensed grammarian." Oh, wait! I don't have a license. There's no license required to set yourself up as a grammarian. And it shows in the quality of material that supposedly will teach you grammar. I'm not actually a fan of requiring paper credentials for every field, but the complete lack of quality control in writing about grammar irritates me so much that I fear I'm in danger of becoming just as cranky as Goold Brown:

"And is it not a fact, that grammatical authorship has sunk so low, that no man who is capable of perceiving its multitudinous errors, dares now stoop to notice the most flagrant of its abuses, or the most successful of its abuses? And, of the quackery which is now so prevalent, what can be a more natural effect, than a very general contempt for the study of grammar?" Goold Brown, A Grammar of English Grammars (1851)

Consider this bit, which like my last screed involves Princeton Review material. (I'll get around to complaining about others, I promise.) The book is Grammar Smart, 2nd ed. (2001). There's a lot to criticize, but most of those problems are found widely in usage guides, so I'll forbear from criticizing them here. They're just copying a flawed tradition.

But some things are outrageously wrong by any standard. The following remarkable analysis comes at the end of a somewhat problematic, although still fairly standard, summary of dangling modifiers, where the authors mean to present real-world examples:

An ad for Natural Ultra Plus pads:

So incredibly thin, you'll never know it's there!

Huh? I don't care how purist your usage is, this isn't a misused modifier.

I suspect that the authors—this book is credited to "The Staff of the Princeton Review"—have been mislead by the comma into thinking that the sentence is parallel to something like this:

There is a crucial difference, though. My example constitutes an actual misused modifier. Amy is refreshingly tangy? Here, "refreshingly tangy" is an adjunct (nonrestrictive modifier, if you want to use the traditional label), and while you can rewrite the sentence so that the modifier is integrated ("her refreshingly tangy glass of lemonade"), corrected versions work with the phrase as an adjunct too. For example,

or, turning it into a relative clause,

(3) Amy relished her glass of lemonade, which was refreshingly tangy.

The sentence proposed as a misused modifier is actually an elliptical version of a so + Adj + that construction. The subject and main verb are understood from prior context:

(4) [A Natural Ultra plus pad is] so incredibly thin [that] you'll never know it's there.

The clause "you'll never know it's there" is not the matrix clause (as it has to be in the dangling modifier analysis). It's a content clause and dependent on the adjective thin. Some quick diagrams may help clarify the relationships. The basic structure follows the analysis in the CGEL. 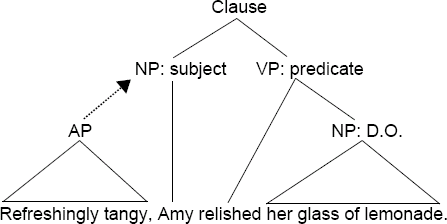 The dashed arrow indicates the relationship between the adjunct, refreshingly tangy and its semantic anchor. In other words the modifier is not syntactically part of the subject, but we interpret it as referring to the subject. That's why this sentence sounds so bizarre. 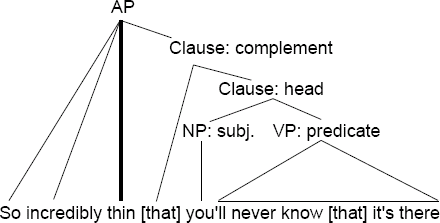 In Princeton Review's example, the entire utterance is actually just a predicate complement: an adjective phrase headed by thin. In other words the clause that contains you modifies thin, rather than the other way around.

The implied that is a subordinator, and there are actually two in this sentence, although the one that's most embedded isn't of real significance to our analysis.

You really have to wonder about the power of a prescriptive rule to override common sense. Who seriously thinks this is wrong? Would any rational person think that the sentence means "you, being so incredibly thin, will never no it's there"? Not unless they let their intuitions be twisted by chop logic.

The pattern of this ad comes up all the time, and no one misinterprets it or finds it ludicrous. Imagine a conversation like this, for example:

A: Mary is thin.
B: So thin, I worry she may be ruining her health.

No ludicrousness there. The comma is one of those put in to indicate emphasis rather than for strict syntactic reasons. Some writing teachers may disapprove of it, but it serves to indicate the appropriate emphasis. In a conversation such as the one above, So thin would likely receive a more emphatic stress than if it appeared in a complete sentence ("Mary is so thin I worry..."), and the comma encourages us to give the words that emphasis.

What sort of heuristic, I wonder, were the authors using to analyze this sentence? Was it along the lines of, "Hey, we have a pattern 'X-comma-subject'. X doesn't refer to the subject, so it's wrong"? I would like to believe that their method of analysis was something more sophisticated, but having made that mistake, you think they would at least have stepped back to ask themselves whether there was any real problem. But no, the rule must be followed, no matter where it leads. We're supposed to take usage advice from such people?

And what does a student make of such examples? What rule of thumb do they construct for themselves to try to avoid such constructions? How often will they waste time self-correcting unobjectionable sentences or producing convoluted, awkward sentences?

Pushing such nonsense on hapless students constitutes grammatical malpractice, and these authors deserve to have their grammar licenses revoked. Oh yeah, no license needed. I forgot.

Mark Liberman and Geoff Pullum at Language Log have repeatedly emphasized the need for linguists to do a better job educating educated people about the basics of their field. They should concentrate their attention on the people who actually teach grammar, especially those who publish books purporting to teach it.