The presence of a noun phrase after a preposition is so common that traditional grammar books often state that a preposition must always be followed by a noun phrase. Certain exceptions, however, make it clear that we cannot accept that assertion.

First, prepositions will sometimes have other prepositional phrases as complements:

(10) The plane emerged from behind the cloud.

From and behind are both prepositions. But notice that from behind the cloud forms a single constituent. You can move it to the front of a cleft sentence:

(10a) From behind the cloud is where the plane emerged.

One way to save this phrase for a traditional definition of prepositions would be to assume that from behind is a complex preposition. In other words, that a two-word sequence has become fossilized and functions as a single unit. But that interpretation won't work. We can move "behind the cloud" independently of from:

(10b) Behind the cloud is where the plane emerged from.

At the same time, we cannot interpret from as a particle, since it does not behave like other particles. In particular, we can't move it to the end of the sentence:

(10c) *The plane emerged behind the cloud from.

The prepositional phrase behind the cloud is actually nested inside a larger PP, headed by from: 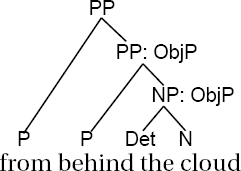 A certain number of prepositions also occur with an adjective as a complement:

Some prepositions can take clauses as complements:

Traditional grammar books classify after in (11) as a subordinating conjunction. But once we realize that prepositions don't need to be followed by noun phrases, there seems to be no reason to make this distinction, and we will not do so.

Sometimes, a word that seems to be a preposition appears alone. Compare these sets of sentences:

Traditional grammar treats the italicized words in (12a) and (13a) as prepositions, but those in (12b) and (13b) as adverbs, once again arguing that the (b) sentences have no noun phrase following up and before, and therefore they must be some other part of speech.

But do up and before really behave like other adverbs? Notice that they can be modified by right/straight, like prepositions and unlike adverbs.

So even though up and before appear in one-word phrases, they continue to behave like prepositions more than like adverbs. To make an analogy with verbs, some prepositions can be intransitive, and do not need any complement at all.