In (13) the adjective diligent is a modifier of the head noun workers. Modifier is a general term for optional elements in a phrase that add descriptive information about the head word. We have already seen some modifiers in the verb phrase: the adjuncts. The noun phrase also resembles the verb phrase in that it can contain contain complements. Distinguishing modifiers from complements in noun phrases, however, is much trickier than distinguishing them in verb phrases, and we will not do so in this course. Instead, we will content ourselves with simply lumping noun-phrase modifiers and complements into the broader category of dependent.

As we explore how to handle phrases such as the one in (13), we will consider several alternatives that we will wind up rejecting. Although you can skip to the end results, I strongly encourage you to follow along with the reasoning. The alternative analyses are ones that are used in other grammar books that you may encounter, and understanding why we should prefer one analysis over another is an important part of navigating grammar.

To explore the constituency of such phrases, I would like to begin looking at a traditional diagram to see what structure it assumes. A conventional Reed-Kellogg diagram of (13) would look like this:

This diagram tells us that these and diligent are both dependents of workers, but makes no further distinctions. If we translate this to a tree diagram, we get the following structure:

Although the labels on the tree diagram add more information, both diagrams make the same assertion about the phrase's internal structure: we can distinguish the head word from the dependents, but otherwise there is no internal structure to the NP. Is this the correct account? In particular, do the words diligent workers form their own constituent? This question arises because diligent workers can function as a noun phrase in its own right. For example,

(14) You should give a raise to diligent workers.

So at first glance, it would seem logical to diagram diligent workers as a noun phrase within the larger NP.[1] Such a diagram would look like this: 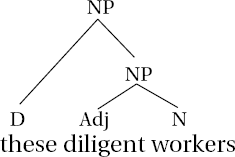 If we are going to use this criterion for phrase-hood, though, we get an odd result if the NP is singular: this diligent worker, because diligent worker cannot function as a full NP.

(14a) *You should give a raise to diligent worker.

Remember that one of our tests is to create a cleft sentence, attempting to move the string of words we are testing to the front of the sentence. By this criterion, these diligent workers is a phrase but diligent workers is not, at least not when it is preceded by a determiner:

(15) If this diligent worker deserves a raise, that one does too.

As the parallel structure makes clear, one doesn't just substitute for worker. It replaces diligent worker, even though that unit passes none of our tests for phrase-hood. In short, diligent worker is a grammatical constituent&mdah;it behaves as a single unit—but it is not a phrase. To account for this behavior, we will introduce a constituent that it intermediate between individual words and NPs. Traditional grammar has no name for this unit, but we will call it a nominal, abbreviated "Nom."
With the addition of the nominal, a diagram of this diligent worker looks like this:

This diagram indicates that the words diligent worker form a constituent, the nominal, and that this constituent combines with the determiner this to form a complete noun phrase.

The nominal also helps explain the constituency of prepositional phrases that appear within noun phrases. Consider, for example, a phrase like (16):

Once again, we must decide how to represent the constituency of the phrase. The "flat" view would be diagrammed like this: 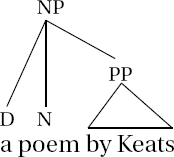 But there is good reason to believe that the noun and the PP also form a nominal. Consider a sentence like (17):

(17) Elizabeth read every essay by Coleridge and poem by Keats.

Here, the determiner every must apply to each part of the coordination. In other words, and links the constituents essay by Coleridge and poem by Keats. Like diligent worker, these units will not pass our tests for phrase-hood. Once again, they are an intermediate unit; they are nominals. Our diagram will therefore look like this: 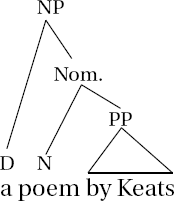 [2] The "___" indicates the location of the clefted constituent in the original sentence.